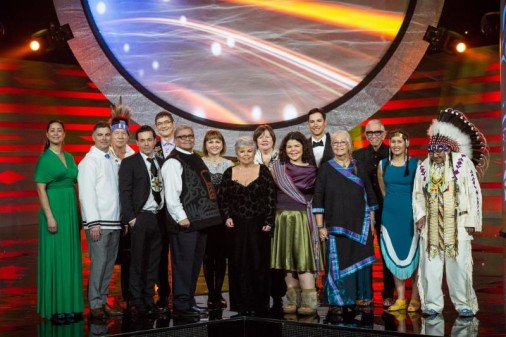 Tune in to APTN or Global TV at 7:30 PM EDT on June 24 th to experience an evening of culture and celebration as we tell the stories of fourteen outstanding Indigenous achievers!

The 2016 Indspire Awards recipients are:

Chief Dr. Robert Joseph is a testament to the ever-present possibility of healing and the power of forgiveness. As a survivor of residential school, he overcame nearly impossible odds. He was a strong advocate for the Truth and Reconciliation Commission and remained active in it until it made its final recommendations in 2015.

Business and Commerce: Clint Davis  – Nunatsiavut, Labrador
Since 2012, Clint Davis has been the Vice President, Aboriginal Banking at TD Bank Group. He is also the Chair of the Board for the Nunatsiavut Group of Companies.

Culture, Heritage, & Spirituality: Chief Jim Ochiese – Foothills Ojibway First Nation, Alberta
Chief Jim Ochiese is not only a professor, but was also instrumental in achieving the right for First Nations people to use Jasper National Park – their traditional land – for ceremony and medicine gathering, after being prohibited from doing so since 1907.

Education: Dr. Jo-Ann Episkenew  – Métis, Saskatchewan
Dr. Episkenew was known for her ability to walk in both worlds: nurturing her identity as a Métis woman while succeeding in – and challenging – colonial institutions, for the benefit of all Indigenous peoples. Before she went on her journey from this world on February 18, 2016, she was the director of the Indigenous Peoples Health Research Centre at the University of Regina, not to mention an accomplished researcher and author. She will be greatly missed.

Sports: Carey Price  – Ulkatcho First Nation, British Columbia
Carey Price is not only one of the best goalies in NHL history, he is also working to literally feed the dreams of children and youth as The Breakfast Club of Canada’s national ambassador for First Nations, Métis, and Inuit communities.

Youth – Inuit: Laura Arngna’naaq  – Baker Lake, Nunavut
Laura is one of few Inuk Chartered Accountants in Canada. Despite working in the heart of Toronto’s financial district, she stays connected to her Inuit roots through studying Inuktitut and teaching herself to carve soapstone.

Zoey is a youth activist, spoken word poet, and community leader. She has created a vibrant life of art and activism despite leaving home at 13 and being incarcerated before the age of 15.

Indspire gratefully acknowledges the support of CIBC as Presenting Corporate Sponsor and Shell Canada Ltd. as Indigenous Youth Sponsor of the 2016 Indspire Awards.

“CIBC has been proud to be the presenting corporate sponsor of the Indspire Awards since their inception to celebrate the significant contributions of Indigenous people,” says Victor Dodig, President and CEO, CIBC. “On behalf of our team at CIBC, congratulations to this year’s recipients, who are an inspiration to us all and incredible role models for Indigenous youth.”

“We are very proud of Shell’s 30-year partnership with Indspire to secure a brighter future for Indigenous youth,” said, Michael Crothers, Shell Canada President and Country Chair. “Congratulations to all of the 2016 Indspire Awards recipients. Your inspirational leadership is building a lasting legacy for your communities and for all Canadians.”

The jury for the Indspire Awards is composed of previous Award recipients, representing a range of sectors and regions across the country. From hundreds of nominations, the jury selects ten career achievement award recipients, three youth award recipients (First Nation, Inuit and Métis), and one lifetime achievement recipient. The jury process is based on the highest standards of fairness, honesty, and respect to all of the highly deserving nominees.

Thank you to the generous sponsors who make this event possible and who contribute significantly to this much-anticipated annual celebration of Indigenous achievement!

The permalink for this story is:
https://bc.nationtalk.ca/story/2016-indspire-awards-to-air-on-aptn-and-global-tv-on-june-24-at-730-pm-edt